New invention at Bielefeld University and the University of Tromsø (Norway)

Physicists at Bielefeld University and tThe Arctic University of Norway in Tromsø have developed a photonic chip that makes it possible to carry out superresolution light microscopy, also called ‘nanoscopy’, with conventional microscopes. In nanoscopy, the position of single fluorescent molecules can be determined with a precision of just a few nanometres, that is, to a millionth of a millimetre. This information can be used to produce images with a resolution of about 20 to 30 nanometres, and thereby ten times that of conventional light microscopy. Until now, this method has required the use of expensive special instruments. Bielefeld University and the University of Tromsø have filed a patent for this new ‘chip-based nanoscopy’ procedure. On the 24th of April 2017 the researchers will be publishing the accompanying study in the journal ‘Nature Photonics’.

Dr. Mark Schüttpelz from Bielefeld University and Dr. Balpreet Singh Ahluwalia (University of Tromsø) are the inventors of this photonic waveguide chip. Professor Dr. Thomas Huser and Robin Diekmann from Bielefeld University’s Biomolecular Photonics Group also worked on developing this new concept. The invention makes experiments much easier to perform: a probe is illuminated directly on a chip about the size of a specimen slide. A lens and a camera record the signal perpendicular to the chip. The measurement data obtained can be reconstructed as superresolved images with a markedly higher resolution than that obtained with conventional microscopy. 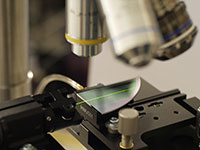 Whereas the images that can be obtained simultaneously with established nanoscopy techniques range from only parts of cells up to just a few cells, the use of photonic chips now makes it possible to visualise more than 50 cells in one superresolution image. ‘The invention of the new chip-based superresolution technique is a paradigm shift in microscopy, and it will now permit a much broader use of nanoscopy in science, research, and everyday applications,’ says Dr. Mark Schüttpelz.

Current nanoscopic techniques are extremely complex, expensive, and require intensively trained technicians. Up to now, these limitations have restricted the use of nanoscopy to only highly specialized institutes throughout the world and prevented its spread to standard laboratories in biology and medicine let alone to hospitals and analytical laboratories.

The invention of the ‘chip-based nanoscopy’ procedure by researchers at Bielefeld and Tromsø will take its place in the long history of developments in microscopy and nanoscopy:

The Latest on: Nanoscopy

New Substitutes for Rubber and Latex on the way

Northrop Grumman, U.S. Navy Catapult X-47B from Carrier, marking the first catapult launch of an unmanned aircraft from a ship

Self-learning, self-assembling software doesn’t need humans to tell it what to do

USC Study: People are hardheaded about their political beliefs, even when provided with contradictory evidence.