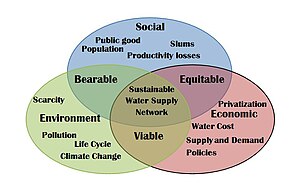 There’s accounting and then there is ACCOUNTING . . .

Many nations are part of an effort to account for the economic goods provided for free by nature–but not the U.S.

Botswana’s diamond mining sector accounts for 31 percent of the country’s economic output — and a glistening De Beers five-diamond bracelet sells online for $1,500. But how much does depleting diamond mines cut into Botswana’s overall economic health?

The Philippines’ untapped gold and nickel is valued at nearly $1 trillion, but the mines and refining process needed to tap them will require a great deal of water. If climate change leads to reduced rainfall in the country, how much would be lost by diverting water from agriculture?

And in Australia, the government has found that pesticides used in farming are causing significant damage to the Great Barrier Reef. But how much might that damage affect the tourist economy that thrives around the World Heritage site?

Those countries and a handful of others have been trying to answer precisely those kinds of questions as they develop some of the world’s first “green” accounting systems. Known formally as natural capital accounting, the idea of measuring the economic value of clean water, clean air, forests and ecosystems in addition to traditional measures of the market value of a country’s goods and services has been gaining traction since the 1980s.

In February, the U.N. Statistical Commission adopted a standardized accounting method, which advocates called a major step, essentially helping environmentalists use the same language and tools that finance ministers and economists use to measure strictly in terms of national accounts. Now, with the approach in June of the U.N. Conference on Sustainable Development in Rio de Janeiro, activists hope that green accounting’s time has finally come.

The World Bank is pushing for countries at the Rio summit, commonly called Rio+20, to commit to implementing natural accounting systems alongside their gross domestic product measurements. Kyte acknowledged that questions remain about green accounting but said countries can “learn while we’re doing,” and argued that the data gleaned by valuing ecosystems are critical to help governments make more sustainable decisions.

Bookmark this page for “Green Accounting” and check back regularly as these articles update on a very frequent basis. The view is set to “news”. Try clicking on “video” and “2” for more articles.