The Latest
Home Innovation The Robotic Future is Fast, Cheap and Out of Control

The Robotic Future is Fast, Cheap and Out of Control 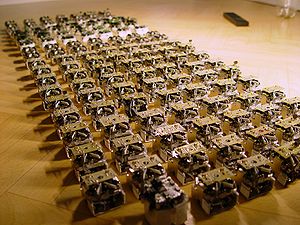 A swarm of robots in the Open-source micro-robotic project (Photo credit: Wikipedia)

The robotic future is here, and it looks nothing like we thought it would.

Instead of humanoid, highly-intelligent robots that do our bidding, the future is increasingly one of robotic swarms, robotic quadrotors, and tiny robots no larger than insects that perform surgery. The robotics revolution, in short, is fast, cheap and out of control. Just as the computer revolution started with massive mainframes and evolved to the personal computer and handheld tablets, the robotics revolution is taking the same path — it is evolving from large, expensive industrial robots to vaguely humanoid robots to cheap, tiny robots that follow you everywhere, thanks to built-in swarm intelligence.

The latest example comes from Planetary Resources’ breakthrough initiative for commercial asteroid mining, in which hundreds of robots working together would participate as part of a collaborative swarm to mine asteroids for resources. The presence of so many robots helps to ensure the success of the mission – think of each additional robot as a form of insurance policy that the mission actually gets carried out. This, in fact, is where the term “Fast, cheap and out of control” originally comes from. In 1989, robotics legend Rodney A. Brooks originally described a “robotic invasion of the solar system,” in which researchers could avoid the prospect of a catastrophic mission failure with swarms of tiny robots:

“Complex systems and complex missions take years of planning and force launches to become incredibly expensive. The longer the planning and the more expensive the mission, the more catastrophic if it fails. The solution has always been to plan better, add redundancy, test thoroughly and use high quality components. Based on our experience in building ground based mobile robots (legged and wheeled) we argue here for cheap, fast missions using large numbers of mass produced simple autonomous robots that are small by today’s standards (1 to 2 Kg).”

All of this, of course, flies in the face of conventional wisdom that future robots should look like us and think like us. Certainly, the story of the humanoid robot is a story that is easy to tell: it feeds into our notions that we are increasingly headed to a world where man and machine co-exist, where robots play a daily active role in all of our lives. Consider some of the stories that have appeared in just the past week: the robot stand-up comedian, the robot prison guards in South Korea, and even robot sex workers. All of these stories seem to suggest that it is just a matter of time before robots catch up to humans in intelligence.

But that misses the larger narrative arc.

Bookmark this page for “Robotic Future” and check back regularly as these articles update on a very frequent basis. The view is set to “news”. Try clicking on “video” and “2” for more articles.