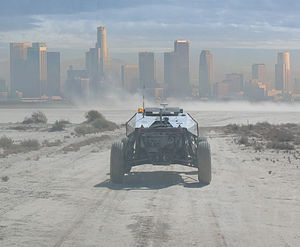 Darpa officials said they were hoping for international participation

In the event of another disaster at a nuclear power plant, the first responders may not be humans but robots. They may not even look humanoid.

The Pentagon’s research and development agency is to announce a competition on Tuesday to design specialized robots that can work in disaster zones while operating common tools and vehicles. And while such tasks may well inspire humanoid designs, roboticists say they may also lead to the robotic equivalent of the Minotaur — a hybrid creature that might have multiple arms and not just legs but treads. Rumors of the challenge have already set professional and amateur robot builders buzzing with speculation about possible designs and alliances. Aaron Edsinger, a founder of Meka Robotics in San Francisco, said he was speaking with fellow roboticists around the country and was considering a wide array of possible inspirations.

“Analogs to animals such as spiders, monkeys, bears, kangaroos and goats are useful inspiration when considering parts of the challenge,” he said.

In the Tuesday announcement, the Defense Advanced Research and Planning Agency, or Darpa, lists eight likely tasks the robot will need to perform — among them driving a vehicle to a simulated disaster site, moving across rubble, removing rubble from an entryway, climbing a ladder, using a tool to break through a concrete wall, finding and closing a valve on a leaking pipe, and replacing a component like a cooling pump.

Mr. Edsinger said the challenge would be not in completing any one of the tasks but rather in integrating them into a single mission. “I feel we have already have systems that can achieve each individual task in the challenge,” he said.

The idea for the competition came from the Fukushima nuclear disaster in Japan a year ago, said Gill Pratt, a program manager in Darpa’s defense sciences office. “During the first 24 hours,” he added, “there were things that should have been done but were not done because it was too dangerous for people to do them.”

The agency has not yet announced how much it intends to spend on the program or the size of the prize. It is calling the program a “robotics challenge,” which is distinguished from a series of “grand challenge” events it held in 2004, 2005 and 2007, with $1 million and $2 million prizes for a contest to design autonomous vehicles to drive in desert and urban settings.

Bookmark this page for “robot competition” and check back regularly as these articles update on a very frequent basis. The view is set to “news”. Try clicking on “video” and “2” for more articles.