A Satellite System That Could End Circling Above the Airport 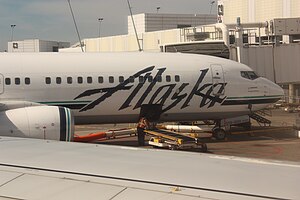 For passengers, landing will feel more like coming down a slide.

Capt. Mike Adams demonstrated what the future will look like at the nation’s airports as he pulled back on the throttles of his Boeing 737 flight simulator, setting the engines on idle to glide smoothly from his cruising altitude all the way down to the runway.

Starting in June, that’s exactly what actual Alaska Airlines flights will be doing when the airline begins testing the use of satellite technology to land at Seattle-Tacoma International Airport — all in the hope of saving fuel and reducing delays.

Alaska Airlines, one of the nation’s smallest airlines, has taken some of the biggest steps in adopting a technology that allows its planes to navigate Alaska’s hazardous terrain, weaving through narrow valleys and mountain peaks, and land at remote airports in some of the worst imaginable weather. Now it wants to demonstrate that technology at big, busy airports, said Captain Adams, the airline’s chief technical pilot.

Planes using the new technology will cut 30 miles from their approach to the airport by taking a more direct path to the runway. They will no longer need to circle overhead awaiting clearance to land. And pilots will not have to push and pull at the throttles — in effect, repeatedly stepping on the gas, then coasting — to maintain the altitude assigned by air traffic controllers as they begin a stairlike descent. For passengers, landing will feel more like coming down a slide.

“This makes much better use of the airspace,” Captain Adams said. “It improves efficiency and reduces congestion. That’s the holy grail we’re all aiming for.”

The Seattle experiment is one of the first extensive applications of satellite technology after years of planning and political wrangling in Washington.

Replacing the radar-based air traffic control system, which the nation’s airports have relied on since the 1940s, is an enormous and expensive undertaking. By one official government estimate, the price tag could reach $42 billion by 2025.

Bookmark this page for “satellite air traffic control” and check back regularly as these articles update on a very frequent basis. The view is set to “news”. Try clicking on “video” and “2” for more articles.

With carbon nanotubes, a path to flexible, low-cost sensors

Using bacteria to kill bacteria as a “living antibiotic”

58.9 mpg Ford engine will be a global game-changer