The Intersection Of The Future Will Have No Stoplights 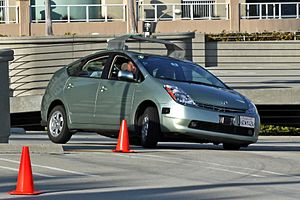 When cars drive themselves, what’s the point of everyone stopping?

Google, as you may have heard, has built a fleet of cars that can drive themselves. Now the Nevada Legislature has passed a law to make those driverless cars road legal (they’ll have red license plates).

The era of truly autonomous automobiles might be right around the corner. And in anticipation, Peter Stone, a professor of computer science at the University of Texas at Austin, has designed a new kind of traffic intersection for them.

In Stone’s system, presented at the annual meeting of the American Association for the Advancement of Science, there are no stop signs or traffic lights. As autonomous cars approach an intersection, they “call ahead” to a virtual traffic coordinator with information about when they’ll arrive and where they want to go. A computer program at the intersection coordinates these requests and grants the cars “reservations” to use particular routes through the intersection at particular times. The result is an efficient, carefully choreographed, and more or less continuous, flow of traffic.

You can see his system in action in the simulation that begins the video above. The white cars have reservations that guarantee their safe passage through the intersection. The yellow cars have yet to receive reservations, so they slow down or stop until they get them. Once they do, they turn white and proceed.

Bookmark this page for “autonomous automobiles” and check back regularly as these articles update on a very frequent basis. The view is set to “news”. Try clicking on “video” and “2” for more articles.