The Latest
Home Innovation For iRobot, the Future Is Getting Closer

For iRobot, the Future Is Getting Closer 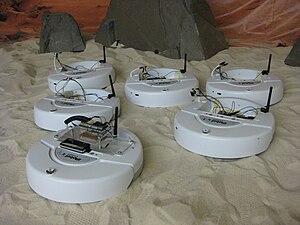 Ever since Rosey the Robot took care of “The Jetsons” in the early 1960s, the promise of robots making everyday life easier has been a bit of a tease.

Rosey, a metallic maid with a frilly apron, “kind of set expectations that robots were the future,” said Colin M. Angle, the chief executive of the iRobot Corporation. “Then, 50 years passed.”

Now Mr. Angle’s company is trying to do Rosey one better — with Ava, a 5-foot-4 assistant with an iPad or an Android tablet for a brain and Xbox motion sensors to help her get around. But no apron, so far.

Over the last decade, iRobot, based outside Boston, has emerged as one of the nation’s top robot makers. It has sold millions of disc-shaped Roomba vacuum cleaners, and its bomb disposal robots have protected soldiers in Iraq and Afghanistan. Now, with Ava, it is using video and computing advances to create robots that can do office work remotely and perhaps one day handle more of the household chores.

In late January, iRobot expanded a partnership with InTouch Health, a small company that enables doctors at computer screens to treat stroke victims and other patients from afar. And this week, Texas Instruments said it would supply iRobot with powerful new processors that could help the robots be more interactive and gradually lower their cost.

“We have a firm belief that the robotics market is on the cusp of exploding,” said Remi El-Ouazzane, vice president and general manager of the Texas Instruments unit that makes the processors.

Mr. Angle’s hopes for broadening the industry’s appeal are shared by other robot companies, which have struggled to expand beyond industrial and military uses, toys and other niche products.

Programming robots to mimic human behavior remains difficult. But the ability to use the tablets as simple touch-screen controllers is attracting more software developers, who are envisioning applications that could enhance videoconferencing, provide mobile security guards and sales clerks and help the elderly live longer in their homes.

And with their own innovations now at the center of the effort, the technology giants — Apple, Google, Microsoft and the semiconductor companies — are also pushing things along.

Mr. Angle, 44, who has been at the forefront of robotics since he was a student at M.I.T., said Ava “is one of the things in our pipeline that I am personally most excited about.” But he cautioned that the robot was still a prototype and would not report for any actual work duties before next year.

Mr. Angle estimates that the early versions of Ava will cost in the tens of thousands of dollars, high enough that the company is focusing first on medical applications with InTouch Health, based in Santa Barbara, Calif.

InTouch already has robots with video hookups in many smaller hospitals, and they have saved lives in emergencies when specialists could not get there in person. But the doctors have to drive and manipulate the robots with joysticks to see the patients.

Mr. Angle said that a tap on Ava’s tablet screen could dispatch it to the right room and free doctors from the more mundane controls. Its mapping system, based partly on Microsoft’s 3-D motion sensor for the Xbox, could enable the robot to hustle to the patient’s bedside without slamming into obstacles.

As time goes on, Mr. Angle says he thinks that businessmen could use the robots as proxies at meetings, speaking and watching wirelessly through Ava’s headgear and even guiding her into the hall for private chats. And if the sticker price eventually gets down to consumer levels, as he thinks it will, Ava could, with arms added, dispense pills to baby boomers or even fetch them cocktails.

Bookmark this page for “future robots” and check back regularly as these articles update on a very frequent basis. The view is set to “news”. Try clicking on “video” and “2” for more articles.

Can Organic Food Feed the World?

‘Roll it’ house turns compact housing on its head – innovation

Information Is Driving a New Revolution in Manufacturing