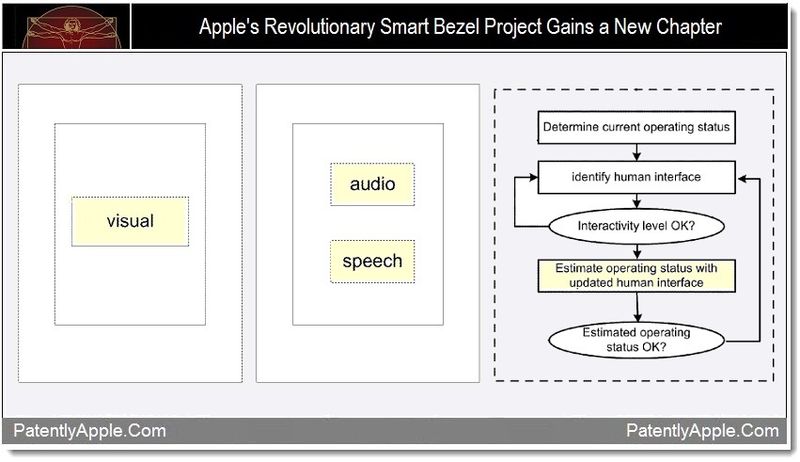 On the last patent application day of the year, the USPTO revealed a real treat for us.

It appears that Apple has added yet another dynamic new chapter to their ongoing smart bezel project; a project that has the potential of taking Apple’s iDevices to the next level. It could, without a doubt, revolutionize Apple’s entire tablet-based line-up in the blink of an eye. The idea revealed in today’s patent application is to advance iOS devices with a new live interface that is referred to as the Multi-Modal Human Interface. The new user interface is powered by a new engine that is able to detect environmental conditions and change the operational interactivity options for users so as to maximize the iDevice’s usefulness – automatically. It’s also designed to reduce power drainage so that devices could be up and running longer. One example provided for in Apple’s documentation is an iPad shutting down the standard iOS UI automatically in favor of one that is driven by a voice and speech recognition UI while the user is driving. This is certainly another natural avenue for Apple’s Siri. Yet, in the big picture, the smart bezel project is all about advancing the usability of future iOS devices on multiple levels. It’s a project that demonstrates that Apple’s leadership in all-things-tablets is based on driving the boundaries of true innovation to market and in the faces of their never ending competition. And on that note, I say Cheers to the Crazy Ones of Cupertino!

Apple’s invention background points to the iPad, iPhone and iPod touch having to have a lightweight battery yet have enough power to use the device and store information. In order to maximize an amount of time that an iOS device could operate while powered by the battery, the power consumption of the iOS device must be optimized for current operating conditions.

Depending upon the display technology, the display could consume a substantial amount of power when active. This is especially true of transmissive type displays (such as liquid crystal display, or LCD) that require an illumination source (also referred to as a backlight) that have a particularly high power demand. However, LCDs could be manufactured to be lightweight and thin, making them eminently well suited for use in small form factor portable electronic devices in spite of their high power requirements.

Therefore, a system, method, and apparatus for maintaining the ability of a user to interact with an electronic device for longer times are desired.

For example, if the electronic device is battery powered and presents visual information using a transmissive type display (that requires backlight illumination), then providing an alternative human interface that relies upon enhancing the presentation of the visual content by increasing the amount of light (and therefore power) provided by the backlight in an environment of high ambient light (such as sunlight) is counterproductive to the maintenance of a long battery life.

Apple’s introduces us to the Multi-Modal Human Interface (MMHI)

In a particular embodiment, the alternative human interface could take the form of a multi-modal human interface (MMHI) provided by an MMHI engine. The MMHI engine could provide an updated MMHI arranged to automatically maintain a pre-determined level of interactivity between a user and the electronic device. In addition to maintaining at least the pre-determined level of interactivity, the updated MMHI could preserve selected operational resources, such as battery charge, when the electronic device takes the form of a portable computing device powered by a battery.

Bookmark this page for “alternative human interface” and check back regularly as these articles update on a frequent basis. The view is set to “news”. Try clicking on “video” and “2” for more articles.

A new field of nano-optics: Controlling the coupling of light and matter at room temperature

LightBeam makes any surface a projector display, and everyday objects a remote control