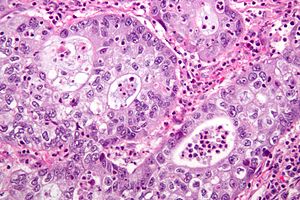 Maikaew Panomyai did a little dance coming out of the examination room, switching her hips, waving her fists in the air and crowing, in her limited English: “Everything’s O.K.! Everything’s O.K.!”

Translation: The nurse just told me I do not have cervical cancer, and even the little white spot I had treated three years ago is still gone.

What allowed the nurse to render that reassuring diagnosis was a remarkably simple, brief and inexpensive procedure, one with the potential to do for poor countries what the Pap smear did for rich ones: end cervical cancer’s reign as the No. 1 cancer killer of women. The magic ingredient? Household vinegar.

Every year, more than 250,000 women die of cervical cancer, nearly 85 percent of them in poor and middle-income countries. Decades ago, it killed more American women than any other cancer; now it lags far behind cancers of the lung, breast, colon and skin.

Nurses using the new procedure, developed by experts at the Johns Hopkins medical school in the 1990s and endorsed last year by the World Health Organization, brush vinegar on a woman’s cervix. It makes precancerous spots turn white. They can then be immediately frozen off with a metal probe cooled by a tank of carbon dioxide, available from any Coca-Cola bottling plant.

The procedure is one of a wide array of inexpensive but effective medical advances being tested in developing countries. New cheap diagnostic and surgical techniques, insecticides, drug regimens and prostheses are already beginning to save lives.

With a Pap smear, a doctor takes a scraping from the cervix, which is then sent to a laboratory to be scanned by a pathologist. Many poor countries lack high-quality labs, and the results can take weeks to arrive.

Women who return to distant areas where they live or work are often hard to reach, a problem if it turns out they have precancerous lesions.

Miss Maikaew, 37, could have been one of them. She is a restaurant cashier on faraway Ko Chang, a resort island. She was home in Poyai, a rice-farming village, for a brief visit and was screened at her mother’s urging.

The same thing had happened three years ago, and she did have a white spot then. (They resemble warts, and are caused by the human papillomavirus.) It was frozen off with cryotherapy, which had hurt a little, but was bearable, she said.

Since she has been screened twice in her 30s, her risk of developing cervical cancer has dropped by 65 percent, according to studies by the Alliance for Cervical Cancer Prevention, a coalition of international health organizations funded by the Bill & Melinda Gates Foundation.

The procedure, known as VIA/cryo for visualization of the cervix with acetic acid (vinegar) and treatment with cryotherapy, can be done by a nurse, and only one visit is needed to detect and kill an incipient cancer.

Thailand has gone further than any other nation in adopting it. More than 20 countries, including Ghana and Zimbabwe, have done pilot projects. But in Thailand, VIA/cryo is now routine in 29 of 75 provinces, and 500,000 of the 8 million women, ages 30 to 44, in the target population have been screened at least once.

Dr. Bandit Chumworathayi, a gynecologist at Khon Kaen University who helped run the first Thai study of VIA/cryo, explains that vinegar highlights the tumors because they have more DNA, and thus more protein and less water, than other tissue.

It reveals pre-tumors with more accuracy than a typical Pap smear. But it also has more false positives — spots that turn pale but are not malignant. As a result, some women get unnecessary cryotherapy.

But freezing is about 90 percent effective, and the main side effect is a burning sensation that fades in a day or two.

Bookmark this page for “cryotherapy” and check back regularly as these articles update on a very frequent basis. The view is set to “news”. Try clicking on “video” and “2” for more articles.

US draws up plans for nuclear drones

Your Most Vital Lesson

How Photon Torpedoes Will Mark An End To The Energy Crisis