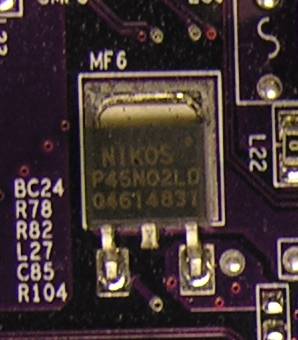 A fully functional, fast switching and printable transistor in cheap plastic is invented by researcher Lars Herlogsson, Linkoping University in Sweden. All six articles in his doctoral thesis were published in the Advanced Materials journal.

The thesis claims that with the help of polymers, plastics, which are already manufactured on a large scale, it is possible to manufacture transistors that are fast and can run on small printed batteries, where the drive voltage is around 1 volt.

They are particularly suitable for printed electronics.

The transistor is made up of two polymers, one of which acts as a semiconductor and the other as an electrolyte; a substance containing mobile charged ions that controls the current flowing through the transistor.

Polymers consist of linked chains of molecules. Thanks to the fact that one type of charged particle in the electrolyte, be it positive or negative ions, binds to the polymer chain in the semiconducting polymer. The active layer, in which the electric field is concentrated in the electrolyte, becomes very thin (1 nanometre) irrespective of the thickness of the electrolyte layer.

“This is robust CMOS technology which allows for very low drive voltages, and besides that, it is well suited to printed electronics,” he says.

“A scientifically very neat job, an intelligent idea that he clearly showed works in reality. There may be applications for this type of electronics such as in large TV screens where silicon is unable to compete,” Svensson says.

Bookmark this page for “Printed electronics” and check back regularly as these articles update on a very frequent basis. The view is set to “news”. Try clicking on “video” and “2” for more articles.

Why the Old Definition of Brand Value Has Died