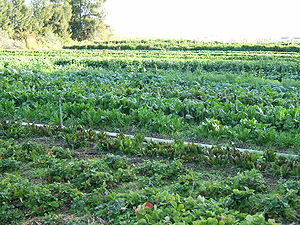 Organic farming is known to be environmentally sustainable, but can it be economically sustainable, as well? The answer is yes, according to new research in the Sept.-Oct. issue of Agronomy Journal. In an analysis of 18 years of crop yield and farm management data from a long-term University of Minnesota trial, an organic crop rotation was consistently more profitable and carried less risk of low returns than conventional corn and soybean production, even when organic prime premiums were cut by half.

Previous research has almost universally found the same thing: Organic farming practices can compete economically with conventional methods, says the current study’s leader, Timothy Delbridge, a Univ. of Minnesota doctoral student in agricultural economics. However, these conclusions are mostly based on findings from short-term trials in small plots.

What sets the Minnesota study apart is both the large size of its experimental farm plots (165 feet by 92 feet) and the trial’s longevity. “Doing an economic study like this, it’s important to get as complete a picture of the yield variability as we can,” Delbridge says. “So, the length of this trial is a big asset. We’re pretty confident that the full extent of the yield variability came through in the results.”

Organic price premiums are often the main reason why farmers think about switching to organic production, Delbridge explains, which means they also often wonder what would happen if the premiums declined. It’s for this reason that the researchers considered different premium levels (full, half, and none) in their analysis — not because they necessarily expect the premiums to go away anytime soon, he notes.

Bookmark this page for “Profitable Organic Farming” and check back regularly as these articles update on a very frequent basis. The view is set to “news”. Try clicking on “video” and “2” for more articles.