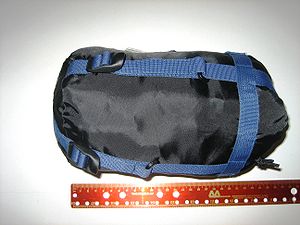 A photo of a highly compact sleeping bag next to a ruler for scale. The unpacked bag measures 210 cm x 65 cm and is a "mummy bag" (tapered at the ends). The packed bag is 23 cm long and has a diameter of 12 cm. (Photo credit: Wikipedia)

Kelvin Quinnine has shivered through more San Francisco nights than he can count, fog biting through whatever worn-out sleeping bag he pitched onto the sidewalk.

He stood last week on Ellis Street with his latest bag wrapped around him. When a young woman wearing a bizarrely baggy coat walked up to him, he cocked his gray-bearded head sideways.

“It’s a coat for the homeless that turns into a sleeping bag at night,” 22-year-old Veronika Scott said brightly. She held an edge out to him. Quinnine pinched it.

“Is that right?” the 43-year-old Quinnine said, face lighting up with appreciation. “That’d be a good thing.”

That’s just what Scott is hoping other homeless people will think when they see her invention over the coming year.

A design student at the College for Creative Studies in Detroit, Scott conceived her coat-bag for a class project in 2010 – and now she’s planning to go national with it.

The Detroit native has watched the homeless population of her economically savaged city explode to more than 30,000 in recent years, and she wants to help.

“What I found, in working at shelters and getting to know homeless people, is that pride is one of their biggest needs,” Scott said. “Whether or not they can get into a shelter, they want to be able to take care of themselves.”

Part of that pride, Scott learned, meant being able to sleep outside without freezing to death. In Detroit in the winter, a homeless person can die of exposure even in the daytime.

To Scott, the logical thing was to devise a warm coat for the daytime that could also be used as a life-saving blanket at night.

Scott takes synthetic quilting used in industrial clothing and stitches it to an outer shell of Tyvek, a paper-thin, crinkly material used in mail envelopes and building insulation. Tyvek is so water resistant and heat-trapping that Scott and her friends have been able to sleep in 17-degree weather, in the snow, and stay warm, she said.

The coat-bag weighs only 1 pound and looks like an extra-large coat with a big hood. It costs $7 to $10 to produce.

“I didn’t mean this coat to make it seem like it’s OK to sleep outside, but our shelters are just so full,” Scott said. “And this is something that can help people in the meantime. It’s really a basic survival thing.”

She presented one of her early prototypes Friday at the Social Capital Markets Conference at Fort Mason, an annual gathering of national entrepreneurs and innovators with an environmental and do-gooding mindset. Amid the admiring oohs and ahs, workshop co-organizer Sarah Brooks said Scott’s idea could catch fire even on the less-frigid West Coast.

“I am so impressed with her,” said Brooks, director of social innovation for the Hot Studio design firm in San Francisco. “She could totally take this thing to scale. I mean, it’s even stylish – I’d wear it.”

Over the past year, Scott has handed out 25 coat-bags to homeless people in the Motor City and gathered rave reviews from NPR and newspapers in Michigan. With companies from Dupont to Acme Mills interested in helping her, she said, she’s ready to graduate in December and start producing her coat-bags – called Element S (for survival) – in big numbers.

Bookmark this page for “homelessness” and check back regularly as these articles update on a very frequent basis. The view is set to “news”. Try clicking on “video” and “2” for more articles.