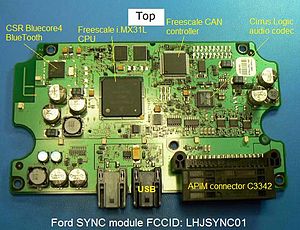 The social networking revolution is apparently not something you can drive to.

A Super Bowl ad for the Chevy Cruze showed a guy heading home from a date and then using a voice-activated version of Facebookto access his date’s status update. But that’s not a real-world technology and may never become one.

The truth is, the auto companies are gun shy about adding too many social media hooks into their vehicles. The main reason is that they could distract drivers. Opposition by transportation secretary Ray LaHood doesn’t help, either.

For four years, though, Ford and Microsoft have offered a middle ground with their Ford Sync technology. With Sync, drivers can do old-school social networking activities, like making hands-free phone calls and adjusting music via voice control, but Sync also lets you receive texts (which are read to you) and reads your tweets — activities that let drivers stay connected, but don’t distract them, according to Ford. The technology is now in 2.5 million cars, trucks and crossovers.

Scott Monty, global digital and multimedia communications manager at Ford, says Sync is a combination of “the built-in, beamed-in and brought in.” The “brought in” refers to your device. If you have an iPhone, for instance, you can sync it up via Bluetooth, though Sync doesn’t transcribe those texts as of yet. The “beamed in” refers to services like traffic reports, which are provided through the system. Voice-activated radio controls are “built-in.”

Ford co-developed Sync with Microsoft and used Nuance Communications’ voice-recognition technology. Initially, Sync was only in one vehicle, the 2008 Focus. One primary appeal of the $395 option (now it’s $295) was the ability to voice control your iPod, which immediately upgraded the standard commuter options of a CD and radio (even satellite radio.) Of course, using the auxiliary input for your iPod or iPhone is now standard, but without voice control, you either have to wait until a stop to change the music or attempt to do it while driving, causing a hazard to yourself and other drivers.

Chris Cedregen, managing director for Iceology, a market research firm, says Sync was an immediate hit, which had a halo effect on the Focus. “It brought the car to a younger audience, which is hard to do,” he says. Cedregen adds that consumers continue to be enamored with Sync. “It’s amazing how often [Ford owners] rave about Sync without being asked,” he says. “They like the connectivity.”

Bookmark this page for “Connected Cars” and check back regularly as these articles update on a very frequent basis. The view is set to “news”. Try clicking on “video” and “2” for more articles.