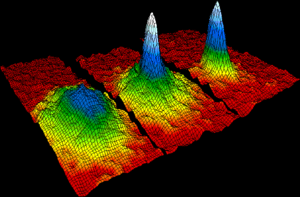 Long before they knew they were doing it — as long ago as the Wright Brother’s first airplane engine — metallurgists were incorporating nanoparticles in aluminum to make a strong, hard, heat-resistant alloy. The process is called solid-state precipitation, in which, after the melt has been quickly cooled, atoms of alloying metals migrate through a solid matrix and gather themselves in dispersed particles measured in billionths of a meter, only a few-score atoms wide.

Key to the strength of these precipitation-hardened alloys is the size, shape, and uniformity of the nanoparticles and how stable they are when heated. One alloy with a highly successful combination of properties is a particular formulation of aluminum, scandium, and lithium, whose precipitates are all nearly the same size. It was first made at the U.S. Department of Energy’s Lawrence Berkeley National Laboratory (Berkeley Lab) in 2006 by a team led by Velimir Radmilovi? and Ulrich Dahmen of the Materials Sciences Division.

These scientists and their colleagues have now combined atomic-scale observations with the powerful TEAM microscope at Berkeley Lab’s National Center for Electron Microscopy (NCEM) with atom-probe tomography and other experimental techniques, and with theoretical calculations, to reveal how nanoparticles consisting of cores rich in scandium and surrounded by lithium-rich shells can disperse in remarkably uniform sizes throughout a pure aluminum matrix.

“With the TEAM microscope we were able to study the core-shell structure of these nanoprecipitates and how they form spheres that are nearly the same in diameter,” says Dahmen, the director of NCEM and an author of the Nature Materials paper describing the new studies. “What’s more, these particles don’t change size over time, as most precipitates do. Typically, small particles get smaller and large particles get larger, a process called ripening or coarsening, which eventually weakens the alloys. But these uniform core-shell nanoprecipitates resist change.”

Essentient Wants To Feed The World Without Farmland