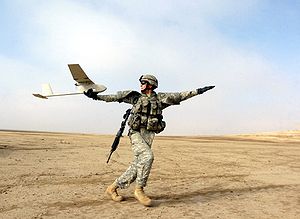 THE future of air power is likely to be unmanned.

It may also be surprisingly small. Reapers and Predators grab the headlines, but these big, high-profile drones are already outnumbered by small and cheap but capable craft.

One good example is the RQ-11B Raven, made by AeroVironment of Monrovia, California, and widely used by America’s armed forces. It looks like a model aircraft. When disassembled it fits into a backpack. Launching it is just a matter of snapping the parts together and throwing it into the air, whence it is carried aloft by an electric propeller. It weighs just two kilograms. That means the American army’s entire annual purchase of almost 1,300 Ravens is lighter than a single fully armed Reaper. Pilots might dismiss Ravens as radio-controlled toys, but they are popular with soldiers and more are being rushed to Afghanistan.

At its simplest, a Raven acts as a flying pair of binoculars that can look over the next hill, or escort a convoy from above. Being small and quiet, it can get close to targets unobserved, for a good look. Unlike the bigger drones, whose limited numbers mean that officers in the field are in constant competition for their services, Ravens are abundant and thus generally available to provide instant video imagery, day or night. The global-positioning system tells it exactly where it is, and special display software means the images it sends back can be overlaid on a map to produce a moving picture of what is going on on the ground. A Raven’s operator can thus call down artillery fire with lethal precision without having to see the target directly. For extra accuracy, Raven can also mark targets with a laser illuminator.

Another reason for Raven’s popularity is that it is easy to use. The controlling hardware is a tablet computer with buttons on the side, something like a portable games machine, and most people can get the hang of it in a couple of days. Predators, by contrast, were originally flown by real, albeit ground-based, pilots—and, though high demand for operators has led to a new rapid-training course for groundlings, this course still takes 22 weeks to complete.

Bookmark this page for “drone” and check back regularly as these articles update on a very frequent basis. The view is set to “news”. Try clicking on “video” and “2” for more articles.

Have You Considered Sewage?

Seed’s Goal Is To “Redefine Journalism For The Internet Age,”

Discovered: A protein that represents a central switching point in the aging process

FTIR spectroscopy could herald a fast and easy way to spot early signs of infection, cancer and neurological conditions

The Cost of Secrecy: Welfare Effects of the Disclosure of COVID-19 Cases