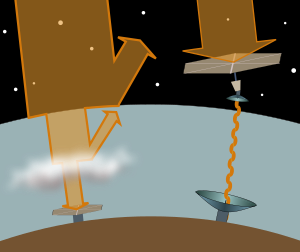 Harvesting solar power in space, for use on Earth, comes a step closer to reality

THE idea of collecting solar energy in space and beaming it to Earth has been around for at least 70 years. In “Reason”, a short story by Isaac Asimov that was published in 1941, a space station transmits energy collected from the sun to various planets using microwave beams.

The advantage of intercepting sunlight in space, instead of letting it find its own way through the atmosphere, is that so much gets absorbed by the air. By converting it to the right frequency first (one of the so-called windows in the atmosphere, in which little energy is absorbed) a space-based collector could, enthusiasts claim, yield on average five times as much power as one located on the ground.

The disadvantage is cost. Launching and maintaining suitable satellites would be ludicrously expensive. But perhaps not, if the satellites were small and the customers specialised. Military expeditions, rescuers in disaster zones, remote desalination plants and scientific-research bases might be willing to pay for such power from the sky. And a research group based at the University of Surrey, in England, hopes that in a few years it will be possible to offer it to them.

This summer, Stephen Sweeney and his colleagues will test a laser that would do the job which Asimov assigned to microwaves. Certainly, microwaves would work: a test carried out in 2008 transmitted useful amounts of microwave energy between two Hawaiian islands 148km (92 miles) apart, so penetrating the 100km of the atmosphere would be a doddle. But microwaves spread out as they propagate. A collector on Earth that was picking up power from a geostationary satellite orbiting at an altitude of 35,800km would need to be spread over hundreds of square metres. Using a laser means the collector need be only tens of square metres in area.

With carbon nanotubes, a path to flexible, low-cost sensors

Using bacteria to kill bacteria as a “living antibiotic”

58.9 mpg Ford engine will be a global game-changer