Man to Receive Kidney from Brother With Different Blood Type 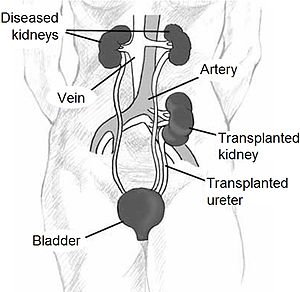 St. Michael’s Hospital is the first hospital t in North America to use a novel blood-cleaning procedure for a kidney patient that will allow him to receive a transplant from a donor with a different blood type.

The procedure used on July 26 is called plasmapheresis and is similar to kidney dialysis, which removes waste products from the blood. Plasmapheresis separates plasma from patient’s blood, and runs it through a column-shaped device containing synthetic carbohydrate beads that trap the blood group antibodies. The “washed” plasma is then returned to the patient’s body.

Andre Cossette, a Grade 4 teacher at Ange-Gabriel Elementary Catholic School in Mississauga, Ont., has been on dialysis for three years. He is scheduled to receive a kidney transplant from his brother, who has Type AB blood, on Aug. 11. Cossette has Type A blood and antibodies against Type B.

“If this procedure works, I get to get my brother’s kidney,” Cossette said, shortly after beginning the procedure, which was expected to last two to four hours. “I won’t have to be on a waiting list, waiting for a call to come to the hospital within four hours because there may be a kidney available.”

The procedure may need to be repeated a few times to get rid of all the antibodies. The patient will also receive medications to prevent his immune system from making more antibodies and attacking the transplanted kidney.

Dr. Jeff Zaltzman, director of the hospital’s kidney transplant program, said the procedure could expand the number of living organ donors. More than one-third of potential live donors are turned down because their blood types are not compatible with the person to whom they wish to donate their kidney.