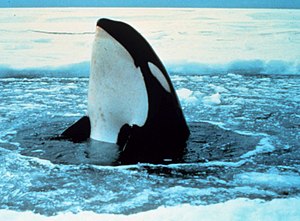 Given how poorly light and radio signals are able to travel underwater, sound is still the best medium for wireless undersea communications.

Conventional underwater microphones – or hydrophones – have their limitations, however. One of their main problems is that the deeper they go, the less sensitive they become. Scientists from California’s Stanford University have now found a solution to that problem, in the form of a hydrophone that is designed to perform like an orca’s ear.

On dry land, the air pressure is more or less the same everywhere, so it isn’t an issue for microphones. Underwater, however, the water pressure increases by the equivalent of one atmosphere for every ten meters (33 feet) that you descend beneath the surface. In deeper waters, there is so much external pressure on the diaphragms of regular watertight hydrophones, that they are barely able to move in response to the additional pressure waves created by sounds. This drastically reduces the range of sounds that they can pick up, and limits their usefulness.

The new hydrophone solves the pressure difference problem, by letting water flow into the device. Because the pressure on either side of the diaphragm is the same, depth is no longer an issue – as is the case with the ears of orcas.

The diaphragm itself is made up of a silicon chip covered with a membrane, that is about 25 times thinner than ordinary plastic film. A matrix of nano-holes in that membrane allow water to pass in and out. Because water is virtually incompressible, however, the diaphragm isn’t able to move much in response to sound pressure waves – some of the quietest sounds that it’s able to detect cause it move no more than a hundred-thousandth of a nanometer.