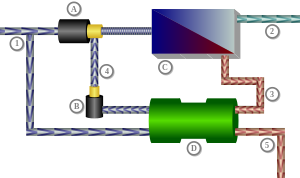 Nuclear desalination uses the excess heat from a nuclear power plant to evaporate sea water and to condense the pure water.

Writing in the appropriately namedInternational Journal of Nuclear Desalination, a team from India and Italy argue that despite public concerns, the low energy costs and convenience of this latter process make it the preferred option.

A ready supply of fresh water is a human right, but access to safe drinking water is becoming increasingly difficult to achieve in many parts of the world. The problems of climate change and population growth are all leading to new pressures on water. Desalination of brackish and sea water by reverse osmosis is expensive and inefficient. Marco Rognoni of Saline Water Specialists, in Gallarate, Italy working with colleagues M.P. Ramaswamy and J. Justin Robert Paden in Tiruchirappalli, India, have calculated the cost balance and demonstrated that the benefits of nuclear evaporative desalination outweigh conventional reverse osmosis.

“The selection of the appropriate desalination technology between evaporation and reverse osmosis is grounded on several factors, including investment cost, maintenance cost, degree of availability, heaviness of the duty, and the required purity of the desalinated water,” the team explains. “The main factor, however, is often the running cost of the plant, and specifically the cost of the consumed energy.”

Energy input accounts for 35 to 45% of the total cost of producing desalinated water using reverse osmosis in which sea water is forced under pressure through a semi-permeable membrane, a filter, so that the ions that make it “salty” are left behind and purified water is formed on the other side of the membrane. However, energy costs are rising while environmental pressure on reducing greenhouse emissions requires alternative and sustainable energy sources for industrial processes.