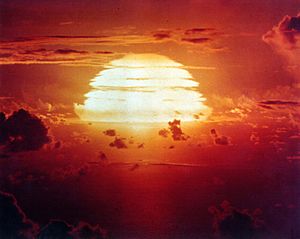 I am a 56-year-old baby boomer, and looking around today it’s very clear that my generation had it easy: We grew up in the shadow of just one bomb — the nuclear bomb. That is, in our day, it seemed as if there was just one big threat that could trigger a nonlinear, 180-degree change in the trajectory of our lives: the Soviets hitting us with a nuke. My girls are not so lucky.

Today’s youth are growing up in the shadow of three bombs — any one of which could go off at any time and set in motion a truly nonlinear, radical change in the trajectory of their lives.

The first, of course, is still the nuclear threat, which, for my generation, basically came from just one seemingly rational enemy, the Soviet Union, with which we shared a doctrine of mutual assured destruction. Today, the nuclear threat can be delivered by all kinds of states or terrorists, including suicidal jihadists for whom mutual assured destruction is a delight, not a deterrent.

But there are now two other bombs our children have hanging over them: the debt bomb and the climate bomb.