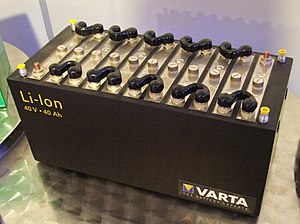 U.S. and Asian rivals are rushing to hone lithium-ion technology. Should the feds get involved?

There is little in its spare Manhattan headquarters to suggest that Ener1 (HEV) could someday be an industrial power. The office of Charles A. Gassenheimer, a former hedge fund manager installed as CEO in August to shake up Ener1’s management, has few props. They include a framed photo of Senator Richard Lugar (R-Ind.) visiting the company’s Indianapolis factory, a poster from a charity event called Ball of the Wild, and a white metallic device the size of a book.

Ener1’s future rests on that device, a prototype of a lithium-ion cell that, Gassenheimer hopes, will power fleets of eco-friendly cars. President Barack Obama has set a target of 1 million electric cars on U.S. roads by 2012. “If we are going to meet that goal,” Gassenheimer says, “it will require about $40 billion worth of domestically produced batteries.” Most experts agree that lithium ion, which can be used to create batteries that weigh far less and store more power than those in today’s hybrids, will be the dominant technology. All Ener1 needs to ramp up is a $480 million loan from Washington.

The big question is whether Ener1 or any other U.S. battery maker will be a major player by the time a mass market develops for electric cars, which could take a decade. The field is already crowded. Other U.S. companies claim to have prototypes that work at least as well as Gassenheimer’s. They include A123 Systems, a Massachusetts Institute of Technology spin-off, and Franco-American venture Johnson Controls-Saft, which has snared contracts with Ford Motor (F), BMW, and Mercedes-Benz (DAI). But the Americans face Asian rivals with deeper pockets and far more lithium-ion experience.

Whoever prevails, some lithium-ion batteries will likely be assembled in America. The bigger stakes are over which companies will control the key technology—the lithium-ion cells stacked inside the batteries and the design of the car power system.