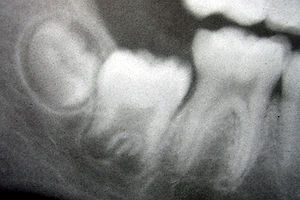 Researchers from the University of Illinois at Chicago have successfully used stem cells to reattach molars to tooth sockets within lab rats’ mouths.

The stem cells were obtained from the periodontal ligament of molars extracted from mice, expanded in an incubator, and then seeded onto barren rat molars. This could have great implications for humans who lose teeth due to gum disease in the future… and for all those toothless old rats out there.

Two to four months after being placed in the rats’ mouths, the stem cells on the teeth aligned and formed new fibrous attachments between the tooth and bone. The result was firmly attached teeth. Tissue sections indicated that the replanted teeth were surrounded by newly formed, functional periodontal ligament fibers and new cementum, which are both essential to tooth attachment.