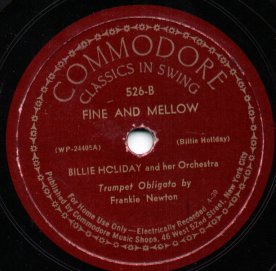 For jazz fans, nothing could be more tantalizing than the excerpts made available by the National Jazz Museum in Harlem of newly discovered recordings from the 1930s and ’40s.

Nearly 1,000 discs containing performances by masters like Coleman Hawkins, Lester Young, Billie Holiday and the long-neglected Herschel Evans suddenly re-emerged when the son of the audio engineer, William Savory, sold them to the museum.

The museum is doing its best to clean up and digitize the recordings. But because of the way copyright laws work, excerpts may be all that fans can hear for some time. The museum paid for the discs, but cannot distribute the music until it has found a way to compensate the estates of the musicians, many of which may be very difficult to track down after all these decades. Hawkins’s saxophone solo on “Body and Soul” may be reason enough for Congress to revisit this issue and free historical documents from excessive legal fetters.

Copyright laws are designed to ensure that authors and performers receive compensation for their labors without fear of theft and to encourage them to continue their work. The laws are not intended to provide income for generations of an author’s heirs, particularly at the cost of keeping works of art out of the public’s reach.

The Savory collection, like other sound recordings made before 1972, is covered by a patchwork of state copyright and piracy laws that in some cases allow copyrights to remain until the year 2067. Congress needs to bring all these recordings under the purview of federal copyright law, which generally applies during the lifetime of the author or musician plus 70 years. That time period has been criticized as too long, but is unlikely to be changed because it is part of a global trade treaty.

The most significant issue for art like the jazz recordings is that they are considered “orphan works,” still under copyright but for which the artist can no longer be located. In 2008, the Senate passed a bill that would limit the copyrights on such orphaned material. Under the bill, if a good-faith but unsuccessful effort is made to locate the owner, someone else can publish the work. An artist who later steps forward is entitled to reasonable compensation but not the heavy damages now in the law.

The House never passed the bill, in part because of objections by artists who feared a corporate takeover of their rights. But it should be possible to re-examine the bill and tighten the good-faith-effort provisions while still allowing orphan works to be published, especially if older recordings are added to the bill. (This could also allow Google and other companies to digitally distribute long-neglected books that are still under copyright.)