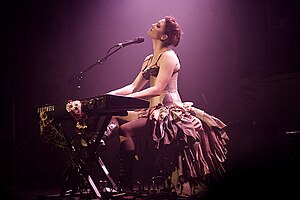 Recently, we’ve noted some similarities between Amanda Palmer and the band OK Go, in that both had been signed to major record label deals, both had built up an amazing (and amazingly loyal) group of fans through various means (different for each) using methods totally outside of their major label marketing effort (which was somewhat lacking in both cases)… and last month, both were officially dropped from their label deals.

In the past, getting dropped from a major record label deal was seen as a bad thing — a sign of trouble for the band. But in both of these cases, the process of getting dropped was initiated by the musicians themselves, who realized they could do much more outside of the major label system, than within it. So it seemed like a bit of serendipity, that both acts had aspects of their ongoing tours overlap in San Francisco this week — leading to an event put together by Creative Allies at the Ex’pression College for the Digital Arts, where both acts performed and did some chatting about music and the music business as part of a webcast. Thanks to Amanda, I was able to attend in person with a small group of folks in the studio, and it was a fun time — as both acts basically celebrated their freedom from their record label deals.

It’s yet another reminder of how the role of the major labels is totally changing. Historically, the only way to be successful in the music business was to get a major label deal. They were the gatekeepers, and without a deal, you were out of luck. Being dropped from a major was effectively the end of your career as a performer with a very small number of exceptions. But, these days, artists are realizing that there’s so much more that can be done without major label help, and that actually being on a major can hinder or block those opportunities, that it’s become a cause for celebration when you get “dropped” — or, perhaps, more accurately, freed!